Cinema is, above all, the art of the real. A series of images that show what actually was. When cinema overpowers reality and becomes a hallucination, that’s something very rare. A privileged moment to be preserved at all costs.

What does it mean to remember Freud and not like psychology? One answer would be that it means making Belle de Jour.
– Michael Wood (2)

There are the films we see – and then there are the films we think we see. The tale of a bored Parisian housewife (Catherine Deneuve) who spends her afternoons working in a brothel, Belle de jour (1967) was the greatest international success of its director, Luis Buñuel. It is also, in a way that no other film quite matches, not one movie but two. An avant-garde experiment and a glossy commercial product, a piece of Surrealist erotica and a high-toned bourgeois comedy of manners, an invitation to sensual abandon and a slyly moralistic cautionary tale. It is also – most crucially – the film we are actually watching and the one we are running (surreptitiously, perhaps) inside our own heads. 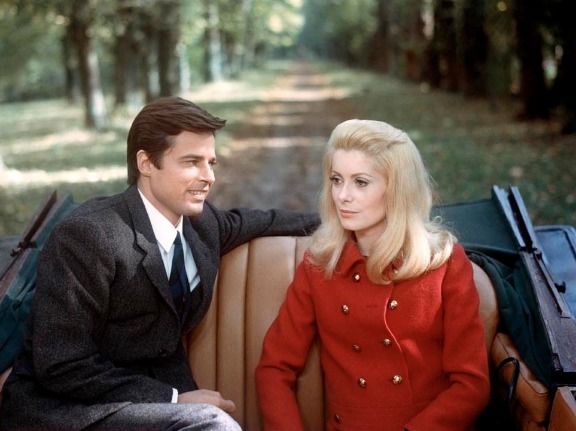 When I first saw Belle de jour as a student, I remembered it for years afterwards as a near-pornographic movie, crammed with copious nudity and graphic sex. Its climax (or so I told anyone who would listen) was an obscene Black Mass where Deneuve – clad only in a flimsy black veil – lies supine while an army of cats run rampant over her near-naked body. Years later, when I watched the film again, I was thunderstruck to realise that Belle de jour has virtually no nudity, absolutely no onscreen sex… and not even the slightest or most subliminal glimpse of a cat! I concluded, blushing deeply, that my recollections had far more to do with my 20-year-old libido than with the film itself. Yet slowly I discovered, as the years passed, that I was not alone. More than one friend or acquaintance had memories of Belle de jour that were as deceptive as mine, albeit (and here I like to flatter myself) a bit less flamboyantly warped.

In terms of explicit sexual activity, there is little in Belle de jour we might not see in a Doris Day comedy from the same year. Yet audiences, then as now, tend to come out of the film feeling we have just had a front-row seat at an orgy. Buñuel, like the veteran Surrealist he was, excels at making us see things we are not shown and imagine things we do not see. Nowhere does this art flower more fully than in Belle de jour. "Belle de Jour is a masterpiece", writes Elliot Stein, "the many-faceted and perfect Golden Bowl that crowns a lifetime’s work" (3). An atypical masterpiece, perhaps, in its extreme visual refinement. Not qualities that even his most fervent admirers expect from Buñuel, the film’s polished mise en scène and lustrous (almost Sirkian) use of colour are the antithesis of his usual image as a cinematic slob.

The gradual transition of the heroine – from frigid housewife to masochist voluptuary – is conveyed less by Deneuve’s eerily mask-like performance than by the smallest and subtlest details of décor, costume and colour. (Her name, as in Joseph Kessel’s 1929 novel, is Séverine – a feminised version of the hero in Leopold von Sacher-Masoch’s Venus in Furs.) As the libertine Husson (Michel Piccoli) tries to tempt her into prostitution, he sends her a vivid bouquet of scarlet roses, which she promptly drops in shock. As Stein says:

Until this point, color in the film has been cool and non-committal. Now, the visual shock of the red roses sprawled on the floor is tremendous – out of all proportion to the apparent seriousness of the incident. A chromatic premonition. As if she had opened a tin of sardines and a live cobra had popped out. (4) 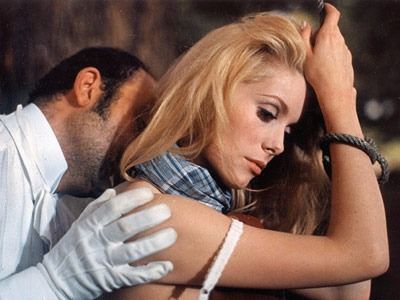 Writing in the days before DVD and the joys of instant rewind, Stein has missed out on the gradual build-up of red in earlier sequences: the red Yves Saint-Laurent outfit that Deneuve wears in her opening masochistic dream; the red chairs in the cafeteria at the ski resort where she first meets Husson; the red cars that pass the window of her taxi as a friend (Macha Méril) informs her that prostitution does exist and ladies of their circle do engage in it. Yet the basic observation is sound. Buñuel, in Belle de jour, is telling his story in ways we would not normally expect him to tell it. That explains, at least in part, why Belle de jour is a favourite film of many people (myself included) who do not usually like Buñuel.

As Séverine grows more seasoned (I hesitate to say more comfortable) in her alternate life, the borders of reality and dream – which have been problematic in this film from the outset – start to feel progressively more blurred. In the first half, Séverine’s fervid daydreams treat us to a number of Decadent fantasies in a florid 19th century mode. In one, her husband (Jean Sorel) drives her in a horsedrawn carriage through an autumnal wood. There he ties her to a tree and flogs her, and hands her over to the coachmen to be raped. In another, the husband and Husson tie her up in a field of cows and pelt her with manure. (Each dream contains a passing reference to cats – but the animals themselves are never seen.) Meanwhile, the brothel where she goes to indulge her fantasies looks strangely banal, like a dowdy suburban sitting-room – not at all the exotic and aestheticised space of "whorehouse" movies like La Viaccia (Mauro Bolognini, 1961) or Pretty Baby (Louis Malle, 1978).

But midway through Belle de jour, these two worlds blend in the film’s most graphic and infamous set piece. Seated at an outdoor café in the Bois de Boulogne, Séverine is approached by a nobleman in 19th century garb (Georges Marchal) who travels in the horsedrawn carriage of her dream. He conveys her to his château in the heart of an autumn wood. Here she must impersonate his dead daughter, while he masturbates discreetly beneath the coffin. (Allegedly, the producers trimmed this sequence even before submitting it to the French censor.) A butler interrupts at one point to ask: "Shall I bring in the cats?" We hear them briefly, yowling off-screen. "To Hell with you and your cats!" shouts the duke, as he groans his way towards climax. Once he is done, the butler turns Séverine unceremoniously outside, into the rain. 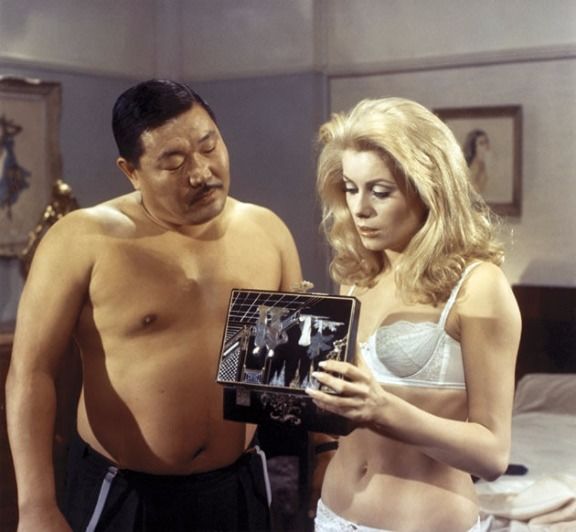 According to Buñuel, this scene was part of the film’s "real" story, an episode from Séverine’s day-to-day life as a prostitute. Yet the writer who collaborated on the screenplay, Jean-Claude Carrière, always insisted it was one of her dreams. It is a measure of Belle de jour’s triumph that this sequence is – quite convincingly – either or neither or both. Its imagery and its ambience seem to be drawn, overwhelmingly, from the dreams that precede it. Nor is there any indication at the brothel that Madame Anaïs, its elegant patronne (Geneviève Page) ever expects her girls to make house calls. Yet Séverine, in this instance, is clearly indulging a male fantasy – and not her own – and doing it in exchange for money, as she does in her working life.

If Belle de jour is in fact two films, then the coffin episode is two scenes and possibly more. As Michael Wood writes:

Buñuel, on film as distinct from in his interviews, is suggesting that although the imaginary and the real can usually be separated, in Belle de Jour as in life, the separation is not always easy or even possible, and this sequence is there to remind us of uncertainty, to create a crossover, twilight territory of doubt. (5)

Is it any wonder if a viewer’s memories of Belle de jour so often get a tad mixed up? I might even go further and say, the more richly and tantalisingly confused you get, the more fully you have understood Belle de jour.