Join the Mumblecorps
Swanberg*. Bujalski. Duplass. Katz. Many cinephiles have heard the names, some have seen their work, a few know them through the festival circuit, and I'd guess that at least two of you reading this have actually been in one of their films. What's the deal with this mumblecore** gang; how is everyone connected within this social/artistic network? (I'm buying the domain MyMumblecore.com before Rupert Murdoch can get his hands on it!)
For the purpose of this colorful exercise and excuse to pick up my old illustrator pens (how I used to pay rent in a former life), I've tried to anchor to SXSW 2007 films, since if I put in every name/film with overlap, I'd be playing Six Degrees of Kevin Bacon all the way back to Dziga Vertov. (For instance, the white lines of distribution are entirely specific to Benten Films, the official collaborative leap between LOL and Fish Kill Flea.) While I haven't, say, distinguished between Craig Zobel's position as a producer of David Gordon Green's George Washington compared to Mike Tully's role as hair and make-up, my point is the tangled web of interconnectedness itself, not all-encompassing accuracy.
For that matter, I'd almost have to include SXSW Festival Producer Matt Dentler for putting so many of these people and films in the same room, including Ronnie Bronstein's Frownland, which played at the fest this month and has gained fans and friends on the chart above. Ronnie is a projectionist in NYC, as is Aaron Katz, so I really could go on and on and make the world seem even tinier.
And speaking of Dentler, he'll be moderating an Austin Film Society panel about film blogging on Tuesday, April 10th. I'll be taking part while I'm down in Texas to screen Fish Kill Flea again, and with me in the discussion will be Joel Heller (DocsThatInspire.com), Jette Kernion (Cinematical.com) and Mike Curtis (HDforIndies.com). Come check it out, Austinites!
* I'm drawing a dark grey line of special thanks to Joe Swanberg, who showed me even more linkage without adding names nor films. Methinks we're getting into fractal mathematics here.
** While "mumblecore" and the also proposed "Slackavetes" are fun to say and so ridiculous that I fear they'll never disappear, I think both are misnomers and unfair dismissals of the continually expanding work these filmmakers are putting out. The origin of mumblecore can be read about in this post by Spencer Parsons (who, himself, is technically connected to the hive: his upcoming feature debut I'll Come Running shares producers with Hannah Takes the Stairs and Old Joy, the latter of which costars Will Oldham, who was in The Guatemalan Handshake. It never ends!)
Aaron Hillis. 2007 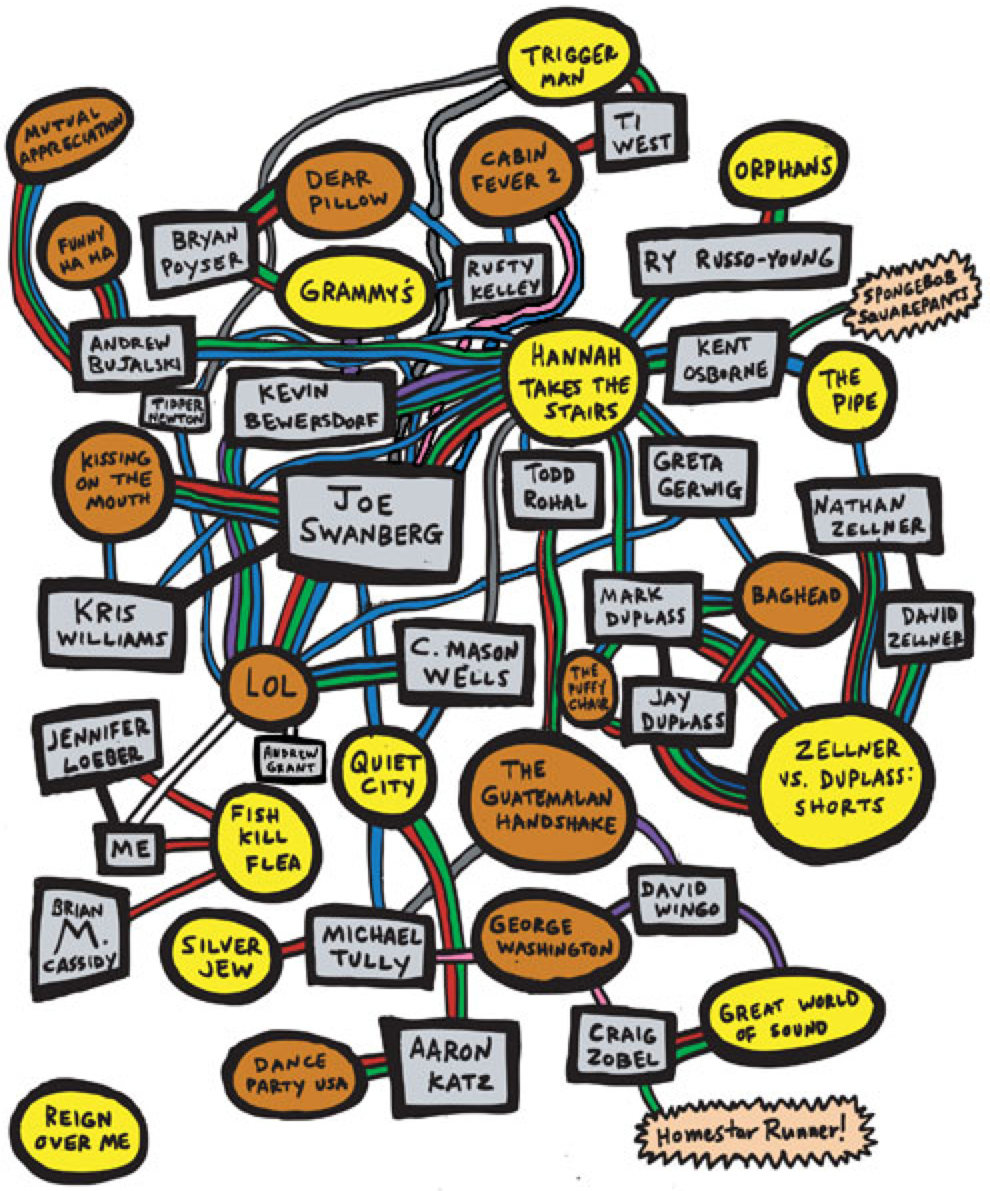