The lead character in The IT Crowd star's new coming-of-age tale is refreshingly rotten. So here, writing exclusively for the Guardian, he chooses his A to H of antiheroes 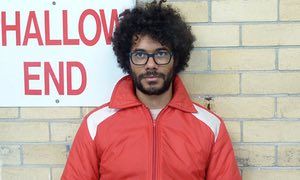 Richard Ayoade on the set of Submarine. Photograph: Gary Williamson. To see an illustration of Richard's antiheroes, click the pic.

When the Guardian finally came crawling, begging me to prop up its ailing fortunes by graciously condescending to write an article for its so-called "Guide", I was overcome with such a fit of anger at the wormy presumption of it all that I could scarcely finish my mid-morning muffin. But as I stared into the trusting eyes of the carrier pigeon they'd employed to deliver this wretched entreaty, I had a change of heart. Wouldn't this be a good way of trying to convince people to see the film I'd directed (Submarine: a coming-of-age comedy based on Joe Dunthorne's critically acclaimed novel, executive produced by Ben Stiller, and featuring original songs by Alex Turner) without looking like it was flat-out, self-seeking publicity? Especially if I gave it some kind of hastily-decided-upon theme that tangentially related to it and which was cursorily amusing if not actually laugh-out-loud funny? Wasn't my whole "career" based on being just cursorily amusing, if not actually laugh-out-loud funny? And wasn't this necrotic line in quasi-deconstruction the exact kind of drizzly piss that drenches so many articles anyway? I was born to do this! This would be easier than white-collar crime!

Three seconds later I'd decided upon a theme (antiheroes – because the main character in Submarine is sort of an antihero – thank you, muse!), scribbled it on a Post-it note, staple-gunned it to the pigeon and catapulted it back out into the world. Only later, as I watched the dear creature struggle to remain airborne across my moat, did I make a mental note to continue the rest of this correspondence by email. Within months the Guardian Elders had located an internet cafe, set up a Hotmail account, and successfully "logged on". Needless to say, as soon as they worked out how to open my email, they were blown away by my antihero brainwave. After a lengthy back and forth about how much racism I could in principle use, I called in my regular ghostwriter and sank into a deep, erotic sleep.

Yasmin Paige as Jordana Bevan and Craig Roberts as Oliver Tate in Submarine.

The next day, as I woke and made my dawn toilet, I remembered my first reading of Joe Dunthorne's novel and the moment when I decided that I really, really liked it. The book's narrator, Oliver Tate, had just pushed an overweight girl into a pond in order to impress another girl, Jordana. This is what he said: "We all feel proud; as Zoe begins to sob, her shirt splattered green, her stationery slowly sinking, we know this will be one of those vivid memories of youth that Mr Checker told us about in this morning's assembly." In most coming-of-age stories, the central figure feels like an apologia for the author: sainted, misunderstood, and much more sinned against than sinning. I liked that Oliver was selfish, mean, and thought he could get out of it by declaring it before you did: a great antihero.

So, herewith an A to H of antiheroes who may well have inspired the film Submarine and its two protagonists: Oliver Tate and his eczema-stricken love interest, Jordana Bevan. Please forgive both my inconsistent stance on alphabetisation and this already-awkward segue into semi-sincerity.

Alex from A Clockwork Orange

Malcolm McDowell in A Clockwork Orange.

Very few acts of overt heroism here. Yet no matter how bad Alex is by the end, the rest of the world seems even worse. When I was worried about the audience losing sympathy for Oliver, it was a good film to remember.

François Truffaut made five films starring Jean-Pierre Léaud as his fictional alter ego: The 400 Blows, Antoine And Colette (as featured in the portmanteau film Love At Twenty), Stolen Kisses, Bed And Board, and Love On The Run. A cinematic omnivore, Truffaut fills them with allusions (to Hitchcock, Rossellini, Renoir, Vigo, Hawks as well as many others) and yet they feel utterly singular. I feel a good deal of the credit for this must go to Doinel, his and Léaud's peerless creation: egotistical and sensitive; principled and capricious; romantic and inconstant; an intellectual drop-out; a truanting bibliophile.

Benjamin Braddock from The Graduate

The first line in the film is, "We are about to begin our descent into Los Angeles." It's a terrific statement of intent. Benjamin is selfish, rude, unmotivated and pathologically passive, but at least he hates everyone in LA.

Paul Schrader's script, Robert De Niro's performance, and Martin Scorsese's fevered channelling of Hitchcock, noir and Italian horror created one of the most iconic character studies ever. The dissonance between Bickle's flatly intoned testimony and the reality of what's actually happening is brilliantly chilling and funny.

Christina Ricci in The Ice Storm

I gave Yasmin Paige [Jordana in Submarine] several films starring Christina Ricci. Most of the time you feel that her main inner thought is "Kill".

Chloe from Eric Rohmer's Love In The Afternoon

Chloe, played by the pleasingly named Zouzou, was another model for Jordana. As she toys with the affections of a typically Rohmerian prevaricator (that's right, the Guardian: those three words just happened) her main thought seems to be, "You're not even worth killing."

His constant interest in his own legacy is both disturbing and hilarious (if slightly less so than that of Jamie Oliver). Before he's arrested, he stops to build a little monument to himself. He records advice for the next generation. In many senses it feels like a film about the absurd, accepting, blank banality of modern celebrity.

Jean-Pierre Melville makes the most exciting sequences of any director, and he found the perfect actor in Delon. Oliver Tate [played by Craig Roberts] has a poster of Le Samouraï on his bedroom wall. This was the most expensive prop in the film.

The Dude from The Big Lebowski

I don't know whether he isn't just flat-out heroic, though.

Jordana shares the same haircut and love of the colour red.

... does a withering look of entitlement better than anyone.

Unlike Oliver, Max is a great enthusiast and, at his beloved private school, is very open about his literary, cultural and intellectual ambitions. Oliver is Welsh and, like any British school pupil who wishes to evade ritual beatings, knows that studying must be done privately, if at all. Rushmore is perfect, and rivals the best of Howard Hawks in its depiction of male friendship, but one of the main reasons I wanted Craig to see it was for Schwartzman's brilliant, Buster Keaton-like stillness. Anderson delivers a wonderful mix of understated humour and genuine emotion. The moment when Max offers Bill Murray's dishevelled business magnate one of his prized merit badges (having engaged him in a bitter rivalry over their shared infatuation with Olivia Williams's Miss Cross) leads to a magically poignant response and one of the film's best lines: "I'll take punctuality." It's disappointing when Wes Anderson's name is lazily employed as an adjective in order to label something "quirky" (a word used by the same kind of people who would describe Jamiroquai as "funky"), or to denote anything that uses the Futura (or similar) typeface (which makes Stanley Kubrick's The Shining Andersonesque). As the numerous poor-quality YouTube videos claiming to re-imagine films directed in Anderson's style attest, what is truly great about him is utterly inimitable. He is a master film-maker and should not be consigned to the ghetto of quirk.

He is perhaps best remembered for making a suggestion to Whitney Houston. This is the wrong way for him to be remembered.